CLOSE
Share
Tweet
Next >
Beauty and the Beast is a Disney classic, that much cannot be denied. But, it’s left us with too many questions. Disney adapted the film from the French fairytale of the same name by Jeanne-Marie Leprince de Beaumont, but the changes between the two are obvious, and so are the things they left unanswered.


1. Where are the Beast’s parents?

Did they die? Did they leave? Are they cursed too? What is their family name?

2. How did the townspeople just forget there was royalty right over the hill?

It seems very likely that the Beast’s castle can be easily seen from their village. No one wondered who lived there?

3. And how on earth did they not know the prince had turned into a giant Beast?

This sounds like HUGE gossip. And that town loves to talk!

4. Why is the enchantress so mean to children and animals?

It’s been pretty much established that the Beast was 11 (as they’ve been stuck like this for 10 years, as Lumiere says in “Be Out Guest”) when the enchantress showed up and cursed him until his 21st year. Why would she curse a kid? And his dog and cat? And the children of his servants? So mean.

5. How did Gaston shoot arrows out of a musket?

6. Given that Chip is under the age of 10, was he born after the curse?

How did the time work here? The Beast was supposedly a child, yet he aged over the 10 years. What about Chip and his siblings?

7. How many servants did the Beast actually have?

In the song “Human Again” the dishes, the spoons, rakes, mops, and more all sing? Did the Beast have 500 servants, for just one person of royalty?

8. Why do half of these guys have no faces? Are only the special people granted a face?

When the movie ends and everyone’s human again, what furniture are Belle and Prince Adam supposed to use? What silverware?

9. How is there a painting of a grown Beast in the castle, when he was supposed to be 11 when the curse was placed?

Did he time travel? Or is that maybe his father?

10. What would have happened if Belle touched the rose?

Seriously. If she’s the one he’s in love with, and by this point in the film it was obvious she kind of liked him too, would it have made things worse or better for the Beast?

11. Why did the Beast just have a gold ball gown hanging around?

Was it his mom’s? Isn’t he kind of sad about his missing parents?

Mrs. Potts has about 40 tea cup children. Where is their father? Doesn’t she need help raising them? Also, why does Mrs. Potts only ever talk to Chip?

13. Who does Belle think this is if it’s not the Beast… 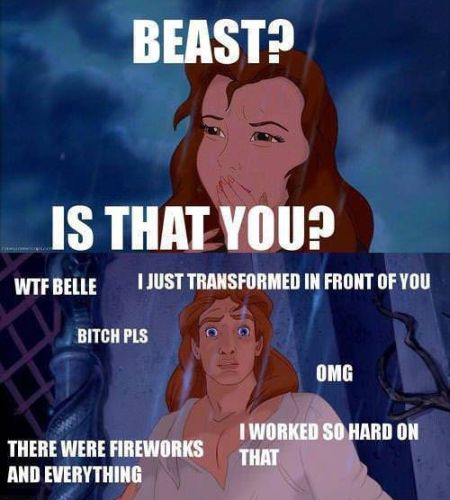 She even saw this painting in the castle earlier. Is Belle not as smart as we all once believed?

In human form his head-chip manifests as a chipped tooth, but as you can see as a tea cup he has a chipped tooth! Where is the second chip on his human body?! Is he deranged because of this head chip?

What other questions do you have about Beauty and the Beast? Tweet us your answers!